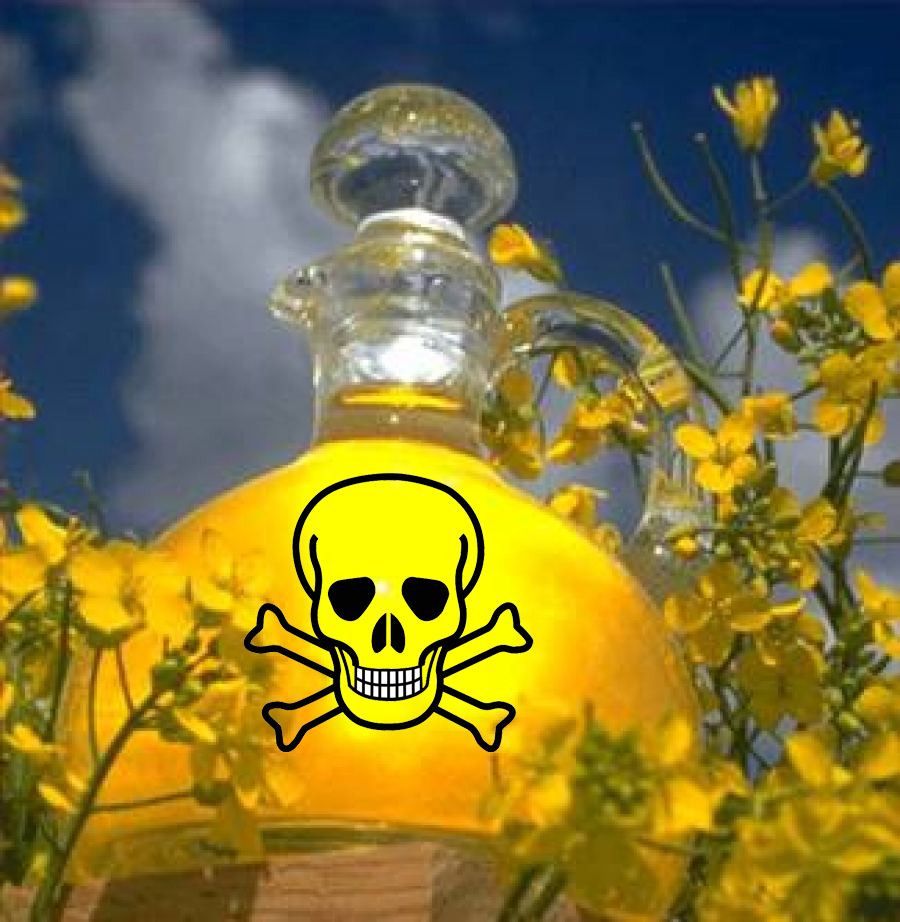 The Worst of the Worst: Canola Oil

The word “canola” comes from “Canadian oil low acid,” and is a genetically altered product of the rapeseed plant.

In the past, rapeseed oil was used in candles, soaps, lipsticks, lubricants, inks, biofuels, and even insecticides.

In 1956 the U.S. Food and Drug Administration (FDA) banned the use of rapeseed oil for human consumption due to the high levels of erucic acid. By the early seventies, rapeseed growers had found a way to genetically modify the seeds to produce an oil with reduced erucic acid.

The oil was reintroduced on the market under the name “Rape Oil” or “Lear Oil” (Low Erucic Acid Rape), which was later changed to Canola Oil for marketing purposes. It was touted a wonder oil, low in unhealthy saturated fats and high in healthy omega-3 fatty acids.

While this GMO seed may have a lower erucic acid content, hybridization and genetic modification also increased the amount of oleic acid. Oleic acid has been linked to stunted growth, abnormalities in blood platelets, free radical damage, and an increased risk of several types of cancer.

A 2011 review published in Environmental Studies Europe reported that mammals fed genetically modified foods for 90 days showed dramatically reduced kidney (43.5 percent) and liver (30.8 percent) functions. This study is only one of the many studies linking GMO food to increased health issues.

Most GMO foods contain high levels of pesticide residues which have shown to cause many life-threatening issues. Furthermore, canola oil is an excellent pesticide on its own, hence its use as a key ingredient in many “non-chemical” pesticides.

According to the Weston A. Price foundation and Fat Experts Sally Fallon and Mary Enig state:

Like all modern vegetable oils, canola oil goes through the process of refining, bleaching and degumming — all of which involve high temperatures or chemicals of questionable safety. And because canola oil is high in omega-3 fatty acids, which easily become rancid and foul-smelling when subjected to oxygen and high temperatures, it must be deodorized. The standard deodorization process removes a large portion of the omega-3 fatty acids by turning them into trans fatty acids. Although the Canadian government lists the trans content of canola at a minimal 0.2 percent, research at the University of Florida at Gainesville, found trans levels as high as 4.6 percent in commercial liquid oil. The consumer has no clue about the presence of trans fatty acids in canola oil because they are not listed on the label.

How Canola Oil is made:

Video: How Canola Oil is made

Recommendations for Healthier Fats and Oils:

One thought on “The Worst of the Worst: Canola Oil + Video”