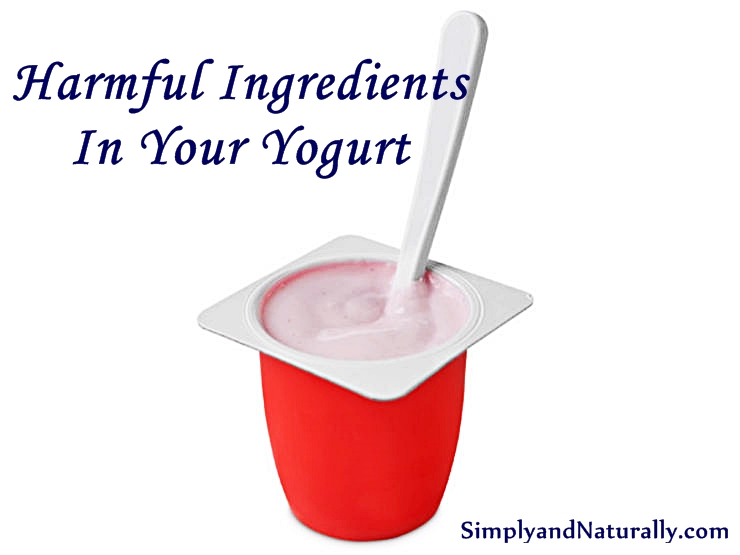 Before You Reach For Yogurt

Do you really know what is in the yogurt you eat? Homemade yogurt, made with raw organic milk, with active cultures is great for you. But commercial yogurt sold at the grocery store is not healthy at all.

A report, Culture Wars: How the Food Giants Turned Yogurt, a Health Food, into Junk Food, issued by The Cornucopia Institute, accuses Dannon, Yoplait, Chobani and other major marketers of misleading parents, who are looking for healthier foods for their families, into purchasing yogurts loaded with sugar and containing a myriad of questionably safe artificial sweeteners, colors and emulsifiers.

The Cornucopia Institute found that the flavored varieties (strawberry, for example) of certain brands contain no actual fruit, and include total sugars that rival those in candy bars.

Keep in mind that there is no such thing as “sugar free yogurt”. Yogurt itself in its natural state has lactose, a natural milk sugar and on top of that, many manufacturers will add another form of sweetener, either regular sugar or a sugar substitute like aspartame (also marketed as NutraSweet) or sucralose.

The use of aspartame is controversial and has been linked to brain tumors and neurological diseases in laboratory animals.

Plain yogurt naturally contains about 16 grams of sugar per cup. But if you eat flavored yogurt, you could be downing 15 or more additional grams of sugar, which is like shoveling in four extra teaspoonfuls (4 grams = 1 teaspoon). 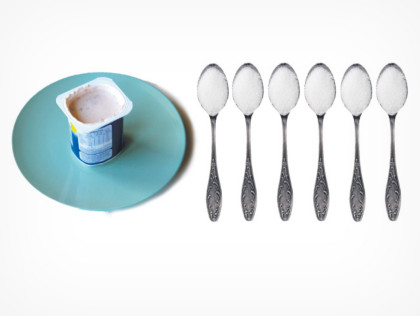 HFCS-90 – This toxic additive is a variation of high fructose corn syrup (HFCS). However, it contains a much higher level of HFCS.

According to a long-term study at Princeton University, the effects of HFCS consumption is much more dangerous than other simple sugars such as sucrose. The study revealed that HFCS doesn’t just contribute to fat gain but actually increases obesity substantially which contributes to known health risk factors (high blood pressure, coronary artery disease, diabetes, and cancer).

Deceptively, yogurt manufacturers have listed HFCS-90 as “fructose” or “fructose syrup” which are terms that can be associated with natural sugars from fruit. The big difference is that it’s not!

Neosugar – This highly processed form of sugar cannot be digested by the human digestive tract. According to Cornucopia, food manufacturers market it as a “prebiotic” or “natural dietary fiber” because it supposedly feeds the microorganisms in the digestive tract.

However, neosugar is processed from either sugar cane or sugar beets that are commonly genetically modified. Neosugar is sometimes labeled as “Nutraflora” and “Fructan.” Don’t these alternative names sound much healthier?

Carrageenan – is a food additive extracted from red seaweed. For four decades, scientists have warned that the use of carrageenan is not safe for food consumption. Research has proven again and again its association with gastrointestinal inflammation and higher rates of intestinal lesions, ulcerations, and even malignant tumors. Yet, manufacturers resist the removing of this ingredient in yogurt.

Some of the yogurts specifically aimed at young children, in squeezable tubes, are among the offerings containing carrageenan.

Pectin – comes from citrus peel, it may seem harmless. The truth of the matter is that the processing of pectin is what is actually harmful. This processing uses synthetic solvents such as ethanol, isopropanol, or hexane (a neurotoxin and hazardous air pollutant).

How To Choose A Healthy Yogurt?

Dr. Natasha Campbell-McBride MD, author of Gut and Psychology Syndrome, recommends avoiding store yogurt and eating yogurt only that you’ve made yourself and fermented for a full 24 hours in order for the majority of the lactose (milk sugar) to be used up and sufficient strength of the probiotic cultures to become established.

One of the best and least expensive ways to get healthy bacteria through your diet is to obtain raw grass-fed milk and convert it to yogurt or kefir.

To your plain yogurt you could add: whole food sweeteners such as raw organic honey or maple syrup, for example. You can also add flavor without sweetening it up by adding some vanilla extract, or a squirt of lime or lemon juice. Whole berries or fruits are another obvious alternative.

When shopping for yogurt look for organic, grass-fed or pastured whole milk (not low-fat or skim).

If you want to know which commercial yogurts are healthy and which are not, refer to The Cornucopia Yogurt Buyer’s Guide. They released a related scorecard rating 114 brands and separating the truly healthy options from those that would be found on any dietitian’s shortlist of foods to avoid.

Kefir is much better than yogurt. Also it is really easy to make at home – how to make kefir using kefir grains.

What is kefir and its amazing health benefits.

New Report Will Reveal Which Yogurts Are Healthy, and Which Are Best Avoided